Bimbly is a Halfling Wizard with an uncanny talent to hate everything. Poozik is a Dwarven Berserker with an insatiable appetite and an awful memory. They occasionally team up and… perform menial tasks like counting houses and fixing water pumps.

No, wait! There is action in this story too. Infinite Paradox Corporation invade the land and attempt to assume control. There are also pirates, wizards, interns and dragons. There is a Dragon! That automatically makes this book awesome.

As darkness looms over the world, an evil Death Lord asserts himself upon the pinnacle of the Black Tower. His shadow stretched across the land and consumes the souls of the unsuspecting and the innocent. Only two reluctant heroes stand between darkness and the light. Two heroes of heroism and justice hold the line and…
No. Sorry, I can’t do this. The first description was way more on point. I promise it’s a lot more entertaining than it sounds. Buy the book, judge for yourself.
Thanks! 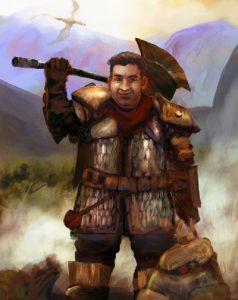 Poozik is a delicate, sensitive flower of a Dwarf. Born to a loving family, he is a profoundly confusing mixed bag of pretty much everything. A lazy, adventurous outgoing introvert who hates to go outside, yet, once there, doesn’t want to go back in. The only thing that is an absolute certainty about this cuddly Dwarf is that he hates pants, very, very much.
His life long dream was to be a fireball flinging Wizard. Unfortunately, life cursed him with Selective Amnesia, which means he forgets things. At some point he forgot that he wanted to be a Wizard and, became a Berserker Warrior. Occasionally, fleeting memories of Wizardhood return to him, and he playfully roleplays the whimsical fantasy of what could have been. Alas, his profession has been chosen and Berserkers cursed with Selective Amnesia could never become Wizard Beserkers, or Berserking Wizards, or Berzards, or whatever you would like to call that awful mess of a class.
Poozik’s passion is food. While he does not like to be angry, the feeling is an unfortunate necessity that comes hand in hand with his profession. After, before and sometimes during the times he gets angry, he gets hungry. Being that his passion is food, eating helps Poozik relax. In this Dwarf’s mind, there is never a better time to relax than the present or the near future, or both. Once the relaxation process has begun, it cannot be interrupted without the risk of triggering another Berserker Rage. 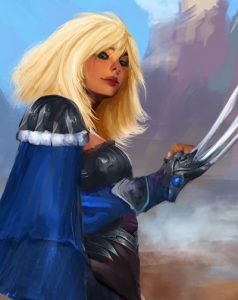